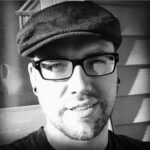 We are deeply saddened to announce the passing of our beloved son Blair, who peacefully passed away on May 5, 2022
surrounded by loved ones after a courageous and hard-fought battle with brain cancer.

Blair was an incredibly bright spark in this world and will be greatly missed by many. He is survived by his mother Starr Hanson (nee Corcoran); father Brian Hanson; brother Brett (Michelle); nephew Bowen; former spouse Chelsea Hanson (nee Redman) and their
children Kenna and Jack; as well as uncle Kevin Corcoran of Kingston, aunt Judi and
uncle David of Winnipeg, and their families; and all of the “super friends” that were by his side since childhood.

Blair was born and raised in Winnipeg and moved to Sherwood Park in 1989. After
graduating high school, he pursued a career as a Journeyman Welder and most recently worked at AltaSteel in Edmonton. Sincere gratitude goes out to colleagues, friends and family for the outpouring of love, care and support.

Although he tested out his skills in many different sports during his childhood, Blair’s
biggest passion in life was music. An avid guitar player, Blair was a self-taught musician and spent countless hours perfecting not only his ability to play but his singing voice as well.

Blair will be remembered for his quirky collections and unique style, but most
memorably for his loving nature, sense of humor, memory, and ability to impeccably
impersonate actors and comedians. He touched the lives of all who knew him and will never be forgotten.

As Blair said, “This isn’t goodbye, this is a see yah later.”

Our sincere thanks to the Royal Alexandra Hospital staff who cared so compassionately for our son.

Memorial donations in Blair’s name can be made to the Alberta Cancer Foundation.

Starr and family,
My deepest condolences to you during this difficult time. What a long journey this has been, I pray that you will find peace knowing that Blair is no longer suffering.

Starr, Brian and family,
I am very sadden to hear of Blair’s passing. I know that he fought long and hard to beat this but it wasn’t to be. Our thought and prayers are with you during this difficult time. RIP Blair.

Starr & Brian we are sorry to hear of Blair’s passing. We hope you and your family are able to focus on the good memories and begin to heal from your loss soon. Take care.

Starr, Brian, Brett and family,
Thinking of you at this difficult and sad time. Our memories of our loved ones who have passed are always cherished. I’m sure you have wonderful memories of Blair and I hope they help you through this most difficult time.
Coral and Ed

Brian, Starr & Family
Words cannot express our heartfelt condolences. Blair will always be in our hearts and never forgotten! May you find comfort and peace in happy memories as you struggle through this journey of loss.
Always, Lori & John

Starr & Brian…Sincere condolences on the passing of your Beloved Son Blair.
Thinking of you both.
Sheryl ..Lori H. Sister